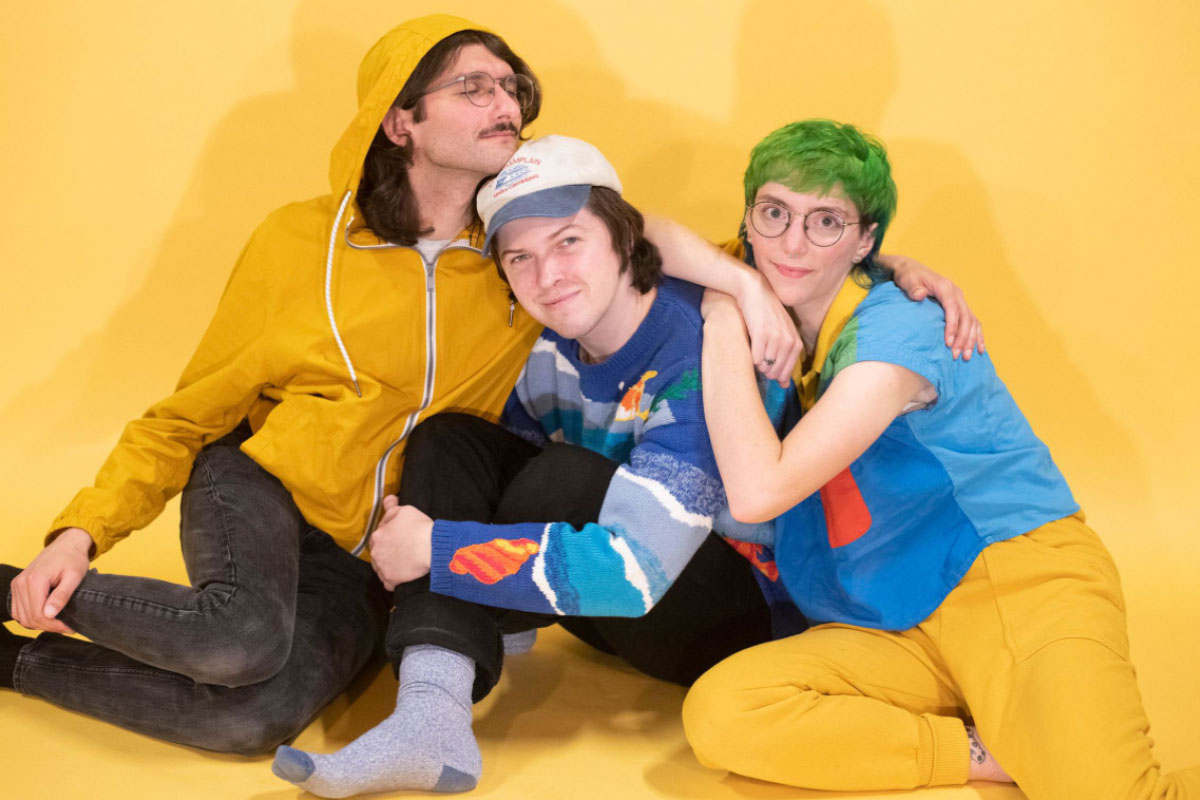 For Another Michael, it all boils down to trust. In mid-2017, the critically acclaimed indie three-piece packed their bags and collectively relocated from Albany, NY to a shared house in West Philadelphia. This move signaled not only the start of a new chapter for the trio, but also a deepening of the bonds that would come to define their captivating debut LP, ‘New Music and Big Pop.’

“It’s hard for a group of people to get closer than living together,” says bassist and producer Nick Sebastiano. “The stronger our connection grew, the more it shaped the music we found ourselves making.”

It should come as little surprise, then, that ‘New Music and Big Pop’ is Another Michael’s most collaborative work yet. Recorded in a small A-frame house-turned-makeshift studio outside Ferndale, NY, the record finds the trio pushing their sound in a dreamier, more folk-influenced direction, building songs around vulnerable, intimate performances using an ethereal palette of breezy guitars, subtle keyboards, and layered harmonies. As on the band’s early EPs, singer and songwriter Michael Doherty’s mesmerizing voice is front and center here, calling to mind Robin Pecknold or Ben Bridwell in its reedy, crystalline timbre, but it feels more at home than ever before amidst the album’s lush, Technicolor landscape, which the band partnered with producer and fellow housemate Scoops Dardaris to create. The result is a masterfully understated record that belies its status as a full-length debut, a thoughtful, poetic, collection all about growth and change, hope and faith, endings and beginnings, delivered by a band that’s only just begun to scratch the surface of their story.

“Recording a full-length album was something we’d been talking about doing for a while,” says Doherty, “but I think we needed to take our time and get here organically. We had to figure out who we were as a band first.”

Launched initially as a solo project, Another Michael began garnering national attention with a pair of early EPs—2016’s ‘Sans’ and 2018’s ‘Land’—that synthesized an astonishingly broad range of influence, from lo-fi bedroom pop and dense chamber folk to PC music and electronic R&B. The sound reflected the eclectic nature of Doherty’s voracious musical appetite, which he honed through a lifetime of careful listening.

“I’ve always been obsessed with discovery,” he explains. “As a kid, I was really into pop radio, and as I got older, I started finding music through MTV and VH1, and then through the internet. I’d listen to everything I could get my hands on, from Damien Rice and Bright Eyes to Usher and Kanye West to Radiohead and Dirty Projectors.”

When launching the band, Doherty found ideal partners in Sebastiano, who grew up loving R&B and dance music, and guitarist/keyboardist/vocalist Alenni Davis, who got their start in the video game and classical worlds, and critics quickly took note of the band’s intoxicating chemistry. The Deli praised Doherty’s “clear-headed, stream-of-consciousness lyrics,” while Bandcamp Best Finds called the band’s sound “fresh and poignant in the most beautiful way,” and The Collaborative Magazine hailed their “breathtakingly peaceful songs about feeling chronically anxious.” The group toured extensively in support of both releases, eventually fleshing out their road lineup with a drummer, whose presence helped influence the music’s evolution.

“When we started touring with a drummer, it really changed how I approached my role in the band,” says Davis. “I started gravitating more towards effects pedals and experimenting with sound and rhythm in ways that I never had before.”

That spirit of experimentation lies at the heart of ‘New Music and Big Pop,’ which bears the distinct fingerprints of all three bandmates, from Sebastiano’s buoyant bass lines and Davis’ warm, open tuning guitar arrangements to Doherty’s gentle finger-picking and evocative lyricism, which focuses as much on the sound of the words as their meaning. While some of the material on the album dates back to the group’s earliest days, the vast majority of it was written after the move to Philadelphia, and very little of it was ever demoed or rehearsed before work on the album began. Instead, the band treated these songs as a space for free-range discovery and exploration, building tracks up spontaneously and together in the moment.

That sonic freedom and deep emotional connection colors nearly every aspect of the album, which opens with the hypnotic “New Music.” Slow and steady, the track builds from a spare, fingerpicked intro to a sweeping, cinematic finale as Doherty reflects on the simple joy of falling in love with a song (and perhaps the person who shared it with you, as well). It’s an ideal entry point into the record, which balances beauty and uncertainty in equal measure as it takes an often meta look at what it means to devote your life to music. The driving “I Know You’re Wrong,” for instance, grapples with the day-to-day realities that pull us away from our creative pursuits, while the airy “What Gives?” relishes in the satisfaction that comes with crafting something out of nothing, and the playful “Big Pop” celebrates music’s power to communicate the otherwise inexplicable.

“For a long time, I thought writing music about music was taboo, that songwriting needed to just focus on your personal life experiences,” says Doherty. “But then I realized that listening to music actually is a huge part of my personal life experiences. It felt so liberating to let go on this record and embrace how powerful music can be and what an important role it’s played in shaping who I am.”

While Doherty frequently finds comfort in his relationship with art and music on the album, his relationship with himself and other humans tends to be a bit more complicated. The melancholic “What The Hell Is Going On?” struggles to connect with a lover before they depart for good, while the swirling “Shaky Cam” frets over the inherent frailty of our physical and mental health, and the wistful “Hone” tries to find something, anything to fill the emptiness that perpetually lurks inside of us.

“In a way, my goal as a songwriter is to pack down these big life experiences into something that can breeze by and feel almost casual,” says Doherty. “I’m trying to tell a story using fragments of the big picture, focusing on these little moments and tiny details as a way of making sense of everything around me.”

Indeed, the world can be a chaotic, confusing, heartbreaking place. It takes guts to face it openly and honestly, to lower your guard and let others in, but ‘New Music and Big Pop’ proves that the rewards will always outweigh the risk. All you need is trust.